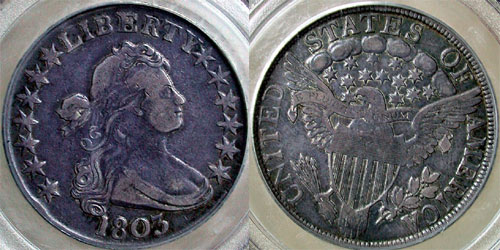 Representing the final regular year of production for the series, the 1803 Draped Bust Dollar (Buy on eBay) had a mintage of 85,634 pieces. Some of these were actually produced and delivered in 1804, still carrying the 1803 date. Thirty years later, pieces would be struck carrying the 1804 date and come to represent major rarities.

This final year of production has noted varieties of a small or large 3. There are four known proof restrikes. One of these sold for $672,750 at auction in February 2007.

The silver dollar denomination was no produced for regular circulation for many years following. The Liberty Seated Dollars of 1840 would restart the denomination.