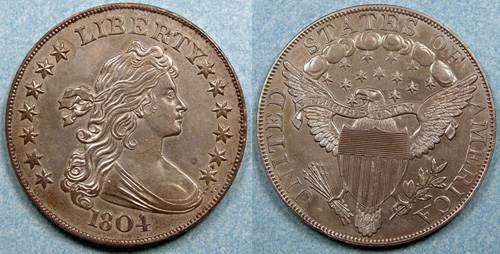 The 1804 Draped Bust Silver Dollar is a famous rarity which has been referred to as the “King of American Coins.” Although the coins carry the 1804 date, none were minted in that year. The earliest examples were struck in 1834, and the final examples may have been struck as late as the 1870’s. The coins were originally created as diplomatic gifts during the administration of President Andrew Jackson. In later years, the coins were struck under less legitimate circumstances. A total of fifteen different examples are known to exist, across three different classes.

In a letter dated November 11, 1834, the Secretary of State informed the Mint Director that President Jackson had requested a complete set of coins to be sent to the King of Siam and the Sultan of Muscat. The Mint interpreted the letter to mean specimens of each denomination currently authorized, including the silver dollar which had not been struck since 1804, although those coins had actually carried the 1803 date. To fulfill the request, the Mint created new dies carrying the 1804 date and struck a small number of coins. These coins would come to be identified as the “Class I” specimens. At present, there are eight examples known to exist, which includes three pieces permanently held by museum collections.

Around 1858, restrikes of the 1804 Draped Bust Dollar were produced as an illegal product of Mint employee Theodore Eckfeldt. These coins were struck on underweight planchets and had a plain edge. Between ten and fifteen examples are believed to have been produced, but these were subsequently recalled and melted. Only one “Class II” specimen has managed to survive and is currently held by the Smithsonian Institution.

Starting sometime around 1859 or 1860 and continuing as late as the 1870’s, additional specimens would be produced. These “Class III” specimens were struck on new silver dollar blanks with a different weight standard, however they did have the proper edge lettering applied. There are six examples currently known to exist, which includes three pieces held by museum collections.

The highest price realized for an 1804 Draped Bust Dollar was for the “Class I” Sultan of Muscat-Watters-Brand-Childs-Pogue specimen graded PCGS PR-68, which sold for $7.68 million in 2021. A complete 1804/1834 presentation set given to the King of Siam is believed to have sold privately for as much as $15 million.